Sealing Australia has Australia’s widest range of o’ring sizes and compounds available off the shelf in Sydney. Our competitively priced o'rings are of the highest quality and expert advice by our conversant sales staff will help you select the right o’ring for your application.

O’rings are the most commonly used seal worldwide due to their simple, economical and efficient design. An o’ring is a torus shaped ring (like a doughnut) that is used to prevent leakage of fluids and gases by filling a clearance gap between two mating hard surfaces with a softer material (usually rubber or plastic).

Despite their simple design, there are many significant factors to be considered in the successful design of an o’ring seal… Material compounds, sizing, groove design and environmental aspects are vitally important to regard when designing an o’ring seal. Get it wrong and the consequences are potentially catastrophic and expensive. The space shuttle Challenger disaster of 1986 is a key example of what can go wrong with a failed o’ring seal; a combination of temperature incompatibility and poor groove design being the primary causes of that incident.

O’rings are typically manufactured in various rubber compounds such as nitrile, fluorocarbon (Viton®), neoprene, silicone and thermosetting plastics like polyurethane and Teflon. Within each of these compounds, there are many different grades of compound which affect the o’ring’s physical properties and chemical resistance. Grading of compounds comes about from the mixing of various fillers, vulcanizing agents, accelerators, aging retardants and other chemical additives to the base polymer which modify and improve the physical properties of the polymer to meet either the requirements of a specific application or for a broad spectrum of applications.

There are different grades for hardness, colour and temperature range. There are grades for contact with food, drinking water and sewerage. Grades for pharmaceuticals, semiconductors, resistance to radiation, resistance to explosive decompression and many more. Careful planning prior to specification is vital for a successful o’ring seal design. Contact us for more info.

There are important factors to consider when selecting a suitable o’ring compound for an application. Operating environment and the physical characteristics of the elastomer must be considered. Incompatibility can shorten seal life, increase machine downtime and contribute to a catastrophic failure.

In order to mitigate issues with incompatibility, the following environmental factors must be taken in consideration when selecting a compound.

Physical Characteristics of an elastomer

Also to be considered are the mechanical and physical properties of the o’ring elastomer, especially of concern in a dynamic application where movement is involved. The following physical characteristics of elastomers should also be taken into consideration when selecting a compound:

Go to our Elastomer Application Guide for information on o’ring compounds and their common applications. Or contact us for more information.

Rubber o’rings are available in various hardness’s. There are two common standards for measurement of rubber hardness: Shore Durometer (specifically Shore A Durometer) and International Rubber Hardness Degrees (IRHD). Both Shore A and IRHD hardness values are comparable, the difference being IRHD is assumed to have a higher accuracy. Measurement is taken with a device which uses a ball or cone indenter connected to a spring and gauge. This device is pressed against the rubber. As the rubber deflects, a value is given. The higher the value or Duro, the harder the material (i.e. less deflection equals a higher value).

The majority of o’ring rubbers have hardness’s between 60 and 90 Duro. The most common hardness found is 70 Durometer. Sealing Australia stocks a wide range of o’rings from 40 Duro to 90 Duro.

There are many imperial and metric o’ring size standards, but few are commonly found in use.

The most common imperial standard is British Standard BS1806, which is equivalent to American Aerospace Standard AS568A. Both have the same three digit size reference (e.g. BS-230 is also AS568-230, and also known as 2-series; e.g. 2-230). There’s also boss seal o’rings for SAE straight thread fittings (also known as 3-series or dash-9; e.g. 3-905). There are non-standard sizes, some known as Dowty sizes and others based on OEM’s, but they’re uncommon.

Compared to imperial, there are quite a number of metric size standards from around the globe such as; Japanese, British, German, Swedish, French and Italian metric standards. French and Italian standards are predominantly based on British Standard imperial with slight variations. The most common metric size standard in Australia is the Japanese JIS-B2401 standard with piston, gland and vacuum sizes (P, G & V). Then there’s non-standard metric o’rings, which are just as common, if not more common as standards based sizing. These are primarily based on rounded numbers (e.g. 30 x 3 instead of 29.4 x 3.1 as found in JIS).

As important as the o’ring seal itself is the groove that the o’ring seats into. The groove must be designed to accommodate not just the o’ring size, but also its intended usage; be it dynamic or static operation, radial or axial loading, vacuum or high pressure.

Please see our Groove Design page for tables of suggested groove dimensions for various applications of imperial and metric o’rings.

Go to our Elastomer Application Guide for information on elastomer shelf life.

We are often asked what is the pressure rating of an o’ring. Pressure limits on o’rings are highly dependent on variables such as groove design, clearance gaps and o’ring compound hardness. Situations of over-pressure often result in what is called extrusion failure; where the o’ring is forced into the clearance gap of a groove, nibbling the o’ring and forcing it to blow out as illustrated below. Extrusion can be caused by over-pressure, excess clearance gap, flexing/expansion of the cylinder wall under pressure or a combination of the above. 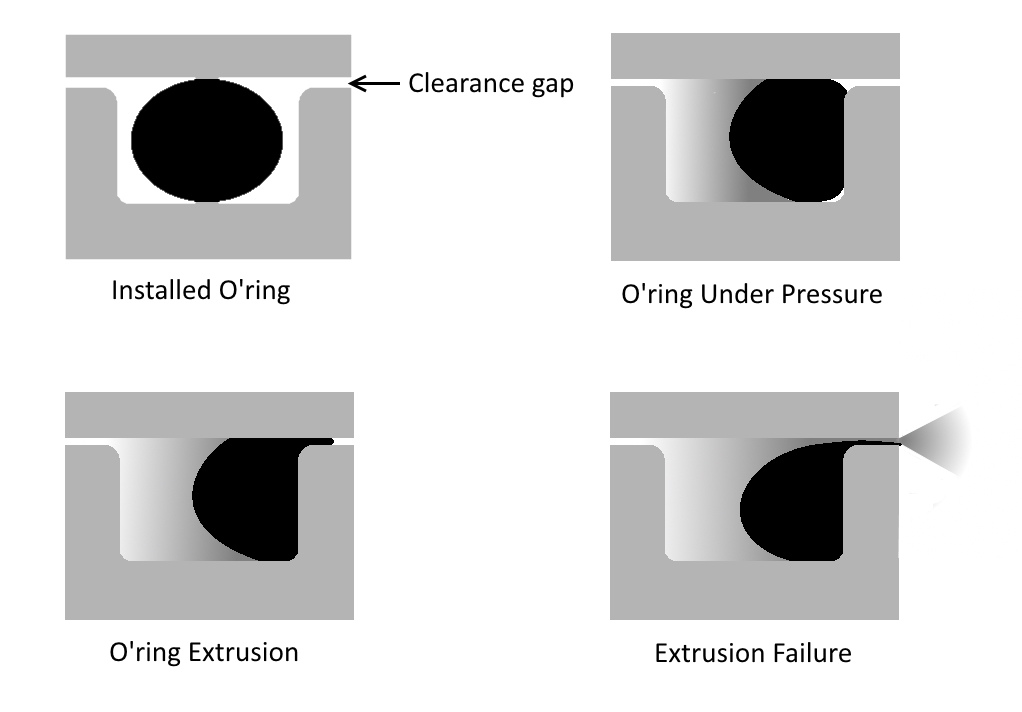 There are a number of ways to prevent o’ring extrusion failure. The most common is to specify a harder compound o’ring (90 Shore A Durometer for example) or if the groove allows, the addition of one or two back-up rings (aka anti-extrusion rings) made from a harder compound than the o’ring. These essentially provide a zero clearance. Go to our Back-up Rings page for more information on o’ring back ups. 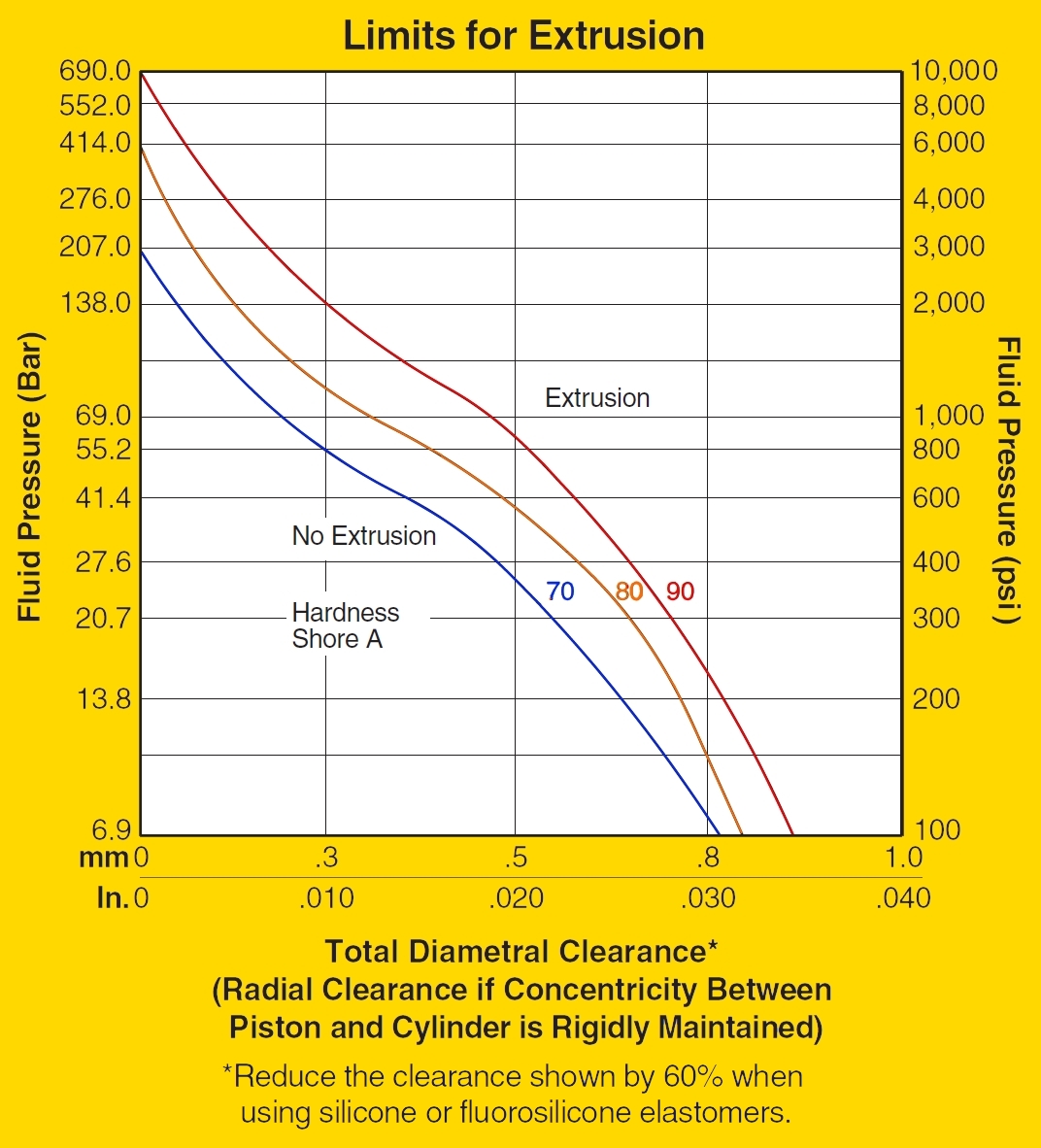 1. 100,000 pressure cycles at the rate of 60 per minute from zero to the indicated pressure

4. Total diametrical clearance must include cylinder expansion due to pressure.

5. Apply a reasonable safety factor in practical applications to allow for excessively sharp edges and other imperfections and or higher temperatures.